Diveagar (Dive Agar) is a serene coastal village in Konkan located in Shrivardhan Taluka, Raigad district in Maharashtra, approximately 170 kilometres south of Mumbai. The area includes a fishing settlement, a beach, a temple, local businesses engaged in coconut and betel nut tree farming, and some resort businesses such as restaurants, cottage rentals and motels, and six villages (from north to south): Velās, Musalmāndi, Agar Panchaitan, Diveagar, Borlai Panchaitan, and Karde.

We had planned a 2-day trip to Diveagar for the Diwali weekend of 13th to 15th November 2015. Vivek and I had decided it be a impromptu trip (our first one), so we had no clue how we are going to make it, but we were pretty clear that we will be leaving early morning on Friday. We left around 6 am from home and reached Panvel. From Panvel one can get on a local train ‘Diva passenger’. We boarded from Panvel, the train was already running ½ hour late and was very crowded. After 3-4 stations, we finally got to manage a seat. Although the journey was a bit uncomfortable, but it was a different experience and we were prepared for it. Phew! We finally got down at a station named Mangaon (it took us almost 4 hour). From Mangaon station, we took an auto rickshaw to the bus stop, which is like 10 minutes away, where we waited for about  ½ hour to figure out the right bus that goes to Mhasala (final destination -srivardhan). One of the co-passengers suggested us to get down at Borli (‘Borlipatnam’ on google maps), a stop next to Mhasala, that will be closer to our destination. Don’t take the bus via goregaon road – it takes much longer. Here a map for your reference:

The drive was again quite rough and took us almost 2 hours. Finally, at about 3 o’clock, we got down from the bus, and asked the locals for the direction to Diveagar. One of the guy, I guess he was a rickshaw puller, suggested us the way. We were really hungry, so we ended up asking him about a good place to have seafood. The guy told us confidently to go to a place called ‘Raane’. We took an auto rickshaw and reached, there was a waiting for the table. In the meantime, we decided to check out the nearby places for stay. We looked for about a few, but in vain, so decided to eat first and then started hunting. We called for 2 Thalis, one Surmai and One Pomfret. The food was to die for, and took away all our tiredness. We were famished and ate like there is no tomorrow. After our dinner, we started walking again, checked each and every hotels, but since it was a long weekend, all of them were full. One of the locals told us to go further towards Shivaji Chowk, and that we might find some good place. We went on wandering, enquiring and walking. While we were enquiring, we found this guy, who asked us to come along with him and if we would mind checking out his place, but the only issue is that he can only give that place for just a day. So we told him that is fine and we won’t mind checking it out. It was a bunch of very pretty small cottages and since he had just started his own business so we cracked a good deal. 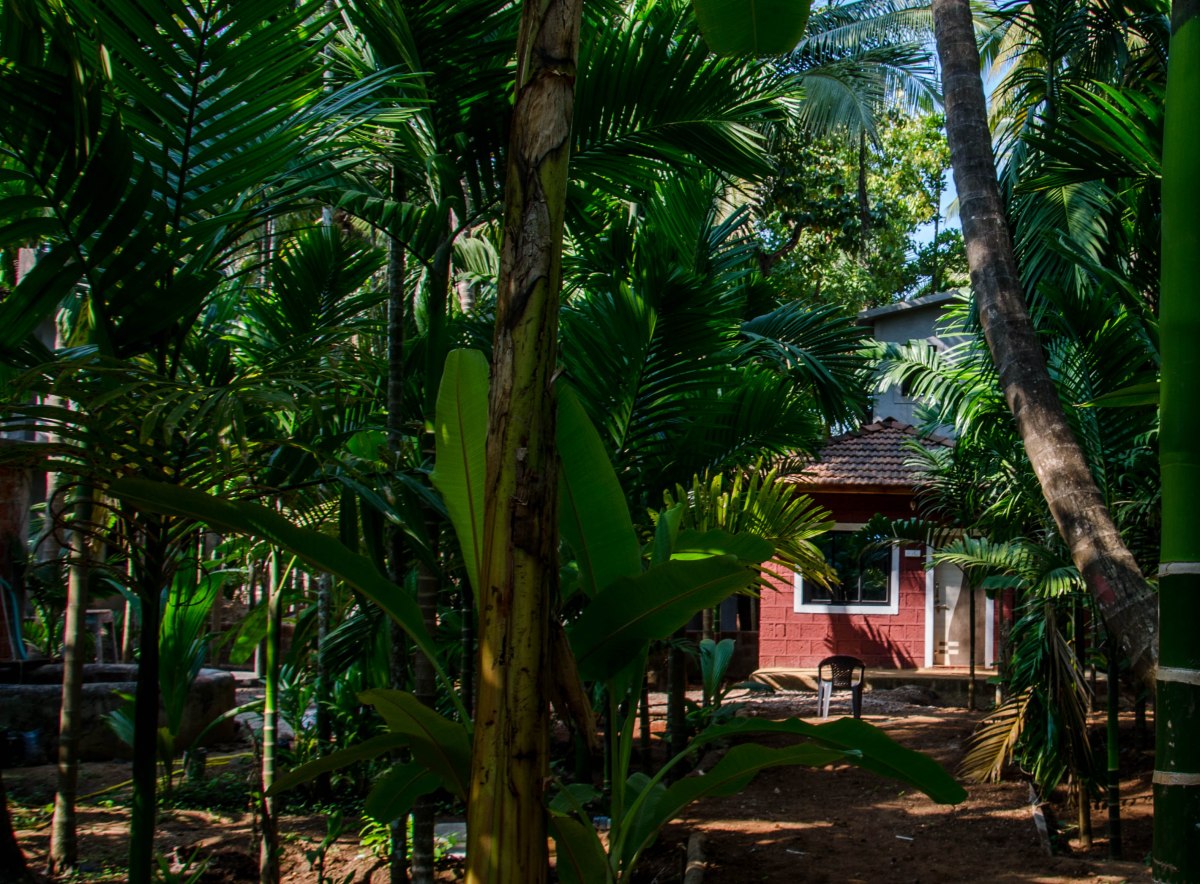 Our hut was apt for two people, simple and cute with attached bath space and basic amenities. The moment we got the keys, we went and passed out. We ended up taking a power nap as we were dead tired. After half an hour, we decided to go to the beach and enjoy the sunset. Our hut was about 10 mins away from the beach. Forgetting the fact that we would have to hunt down a new place again, we headed towards the beach to unwind. We strolled around the beach, found lot of dead starfish and click pictures. It was so peaceful and we loved it. On our way back we met this couple whole were also coming back from the beach and were enjoying just like us. We waved at each other and exchanged smiles. After getting back to our room we thought of exploring to look for places to eat. As we moved ahead of the lane, we found a very pretty hut kind of a set up to dine for. We went inside to enquire and as we were waiting for the owner, we found the same couple who we had met while coming back from the beach sitting there. We went ahead and said hi to them, and they offered us to sit and hang around with them. While we ordered for dinner for later we mentioned them that how it was difficult to find a place and we are still looking for same for the  next day, the couple told us that they are also on a trip like us and that they are leaving the next day. So the guy helped us book the same place for the next day and we sorted our stay. It was such a big relief to us as in our head  we were planning to leave the place the very next day.

We wished them luck for their journey and came out to stroll around till our dinner was getting ready. Since it was diwali all the lanes were nicely lit up with lanterns. Every house had a miniature structures made and were nicely decorated with candles and diyas. The floors were all filled with colours and rangoli. It seemed that the entire village had an aura of its own. By the time we came back the dinner was ready and we’re famished. It was a simple staple konkan thali that had bhakri, rice, prawn curry, fish fry, salad and papad. We had called for the non-veg one and i must say it was one of the best places i had ever eaten. We were so full, we walked down to our hut and passed out.

The next morning we wanted to see the sunrise so struggled to wake up by 7 and reach the beach. We went for a walk, jogged around for a bit, vivek wanted to capture the seagulls so went far ahead till the backwaters. After coming back we went to the same home stay where we had dined the previous night. As we reached, we realized that i have lost my phone on the beach. Vivek rushed to the beach and i was walking to catch up with him and loitering around the route to get the clue about the phone and spot it. Finally vivek found the phone somewhere near the backwater area. We were so relieved. We came back and was too tired and starving. We had called for their staple poha and tea. It was so delicious, and has the rustic touch of that place with no fancy toppings and just fresh shreds of homegrown coconut. Post breakfast we went to our cottage and took a shower,packed our bags and was all set to move to our next stay that was just 5 mins away. 😀

We dumped our bags there and decided to take a stroll around the place. We walked till the rickshaw stand that was at Shivaji Chowk, which is a good 15 min walk, took a rickshaw and asked the guy to drop us to the main beach area which was right near the MTDC resort Exotica. We again decided to get down at the main road and walk through a pathway. We found a place under a tree to get some shade as it was bright sunny day and enjoyed the breeze and the waves. After an hour or so we started walking back to the town, checking out the hotels and places around to cover on our next visit. It was 2pm, and we were starving, we decided to go back to Raane, but this time we called for their chicken curry made in their local style, and one fish thali. Omg! we could have lived on that food and how. After such delicious meal, we headed back to our stay to catch a power nap. As we reached, the owner offered us fresh coconut water which he had just picked from their garden. You could just feel the difference, and it was so fresh and sweet which just made us crave for sleep. In the evening, we went to the beach for sometime and then came back to our stay. I wanted to have tea, so had called for one but I couldn’t drink. One tip, always mention that you want no sugar in your tea, since people i guess put too much sugar. 😛 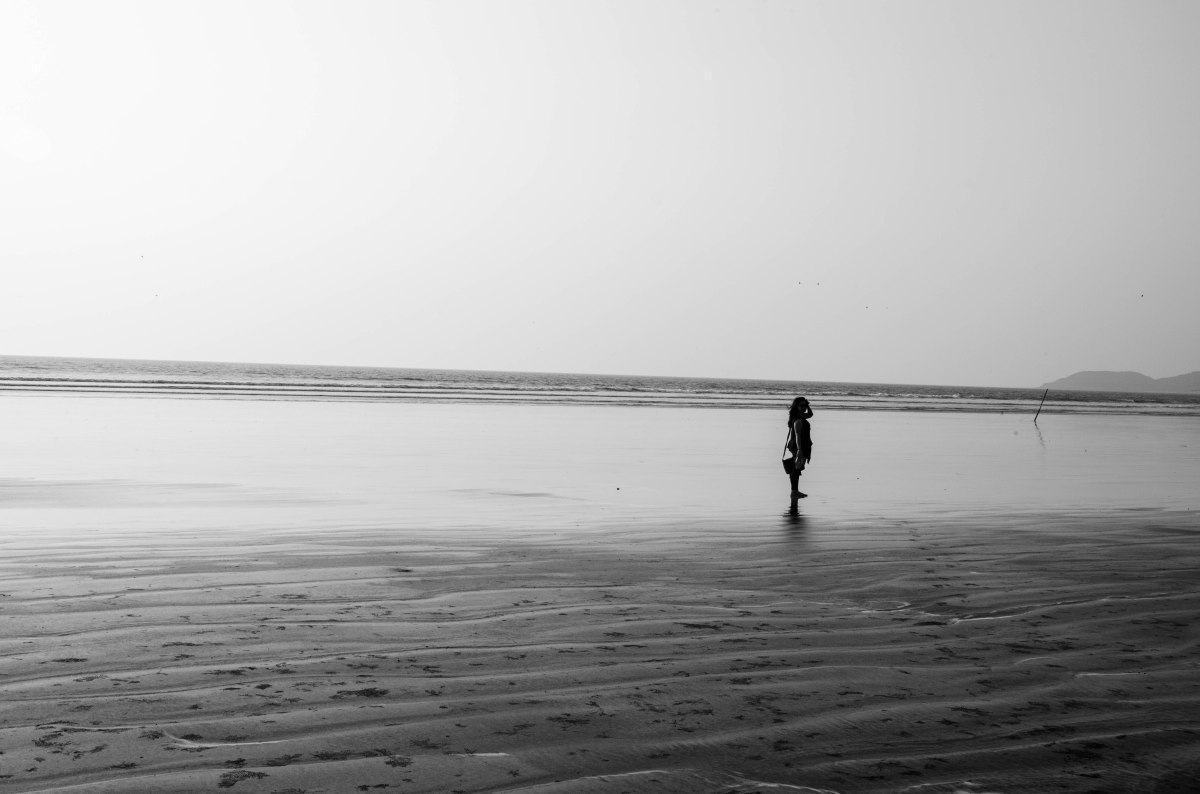 We called for an early dinner since we had to leave the next morning, so I started packing in the meantime. Next day we left early to catch a morning bus from Borli to Mangaon in order to catch the connecting train to Mumbai from Mangaon. We did manage to reach well ahead of time to catch Sawantwadi Road – Dadar passanger but the train was jampacked and we were unable to board the train. With the train gone, the only option left which we thought was ST Bus that was again packed to its capacity but the this desperate time led to some desperate measures and we decided to call this ‘travel like locals’ quit and hire a taxi to Mumbai. The taxi charges were exorbitantly high and we explored the option of shared one. To our surprise we found that shared taxis (omnis) run between Mangaon and Panvel which charges around Rs 250 per person only. This was what we call a happy ending to rather adventurous journey.

Juxtaposition
When life gives you desert, make #spiti out of it
All hail the king!
Imagine colours
“The secret of happiness, you see, is not found in seeking more, but in developing the capacity to enjoy less.” —Socrates
The story of human ambition

Thoughts that have been secured for a while now...

MasyaAllah Tabarakallah, It's a Travel Journal