It was my 27th birthday and a long weekend. Although I never plan my birthday, I always wish that I must spend it somewhere away from the city.

Being aware of this fact my brother and my friends always plan something or the other (Last year I was in Spiti :P).  So, I was expecting something is up and was kind of a bit excited in my head. But boys being boys, they were still wondering where to go and I kept questioning them like a curious child. On Friday, after I came back from work, they told me that we are going to Igatpuri, Nasik and Bhandardhara. Being in Mumbai for past 4-5 years, I had never explored that stretch, hence I did not get that excited since I wasn’t much aware of the place.

I had been to Nasik earlier while I was visiting Shirdih, so I knew it would be a very generic place and nothing much to look forward to. I did not want to tell these guys anything as they had put in so much of effort to make the plan. But while they were doing the research to sort out our stay, I had asked this other friend of mine to suggest something around and if he had any clue about the place. He suggested few things to do and recommended one camping place around the same. We managed to find the contact and spoke to the guy who used to arrange for accommodation. We finished packing for our weekend getaway and finally early next morning we left for Thane from where this other friend was supposed to pick us up. We met him at the junction and headed towards Igatpuri.

Since monsoon was yet to begin, everyone suggested us to wait to a week or two and then plan the trip but we were hell bent on making it. It was a very serene and mystical drive. We got the best of everything, the sun, rain and the misty weather hugging the clouds. As we drove across the city and entered the outskirts, it started drizzling. Our first stop was McD and since all of us were starving, we chose to stuff ourselves at a QSR (It wasn’t a great idea, but was the best of all available). Post breakfast, our next stop was the Vipassana Centre at the Myanmar Gate.  While we drove around and experienced the meditation centre, we made sure we had clicked all possible clichéd images.

By the time we left from there, it had started raining heavily and we were struggling to figure what next since it was an impromptu trip. While driving around, we found this random Dhaba named Neelkanth Hotel which served non-vegetarian food. It was a very street side kind of a place, but the manager/owner made us sit in their private dining area meant for family. I must say, the service was up to the mark and they made us try the dish before bringing the full portion at the table just to make sure if the dish tastes fine as per our pallet. It was simple chicken curry prepared in gauti masala in local methods, but it was so yummmm that we devoured it.

After having a wholesome lunch, it was the time to figure out our stay for Day 1, which we thought we will sort on our way. We checked on all apps and booked a hotel in Nasik. Now that we were relieved of any hotel woes, we decide to drive around and explore the vicinity. My brother and I waited in the car as the other two boys climbed up and walked around this dam. On our way to the hotel, we bought board games, Uno for some entertainment and alcohol to keep us warm.

The rooms that were given to us were interconnected and which was the best part of the stay. The evening was well spent playing numerous rounds of Uno and finishing up an entire bottle of Old Monk. Post having a mediocre breakfast, we checked out and left for Wine tastings in the vineyards of Nasik. On our way, we found this full bloomed Gulmohar tree and we had to stop to click pictures.

The sky was clear with no traces of clouds, and we thanked our stars for it. We started with Sula Vineyards, which was way too crowded, so drove ahead and went to Soma village. As we entered the vineyard, we explored their amazing property and chilled for a while near their pool area. From there, we headed to YORK winery, although they ain’t that big with the property, they own a very pretty garden facing the restaurant. We decided to go for their wine tasting sessions since we missed at Soma due to time constraints. They charge INR 250 and make you taste 7 varieties of wines which include red, white, rose and sparkling and is kind of a steal deal. Now that we got a bit tipsy, we decided to explore the lake and cheese factory that we had spotted while entering this area. It wasn’t a factory per say, but it was a farm house where the owners made cheese at home and rent out their 2 villas for stays. We tried 4 kinds of cheese (Feta, Pepper, Chilli and Mozerella) and bought some to take back with us. 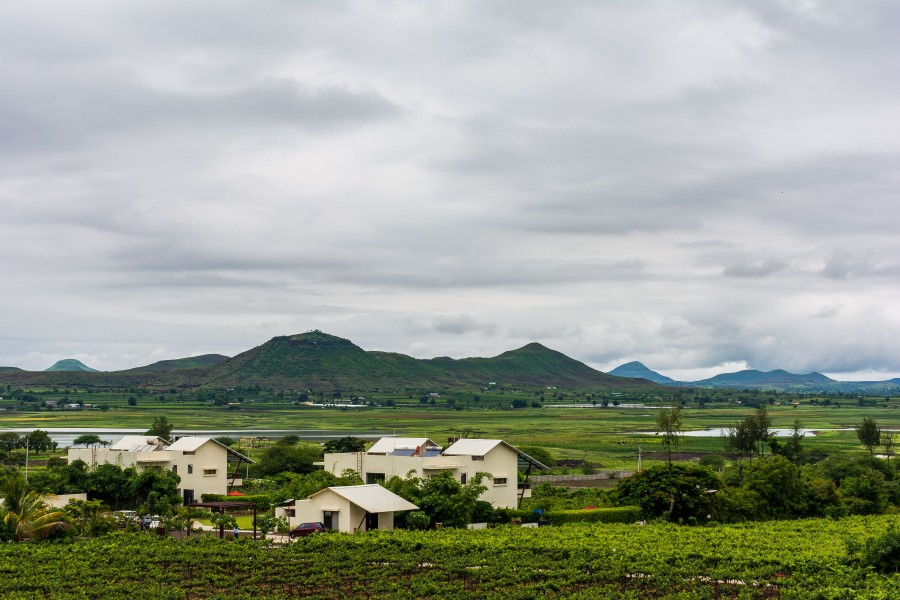 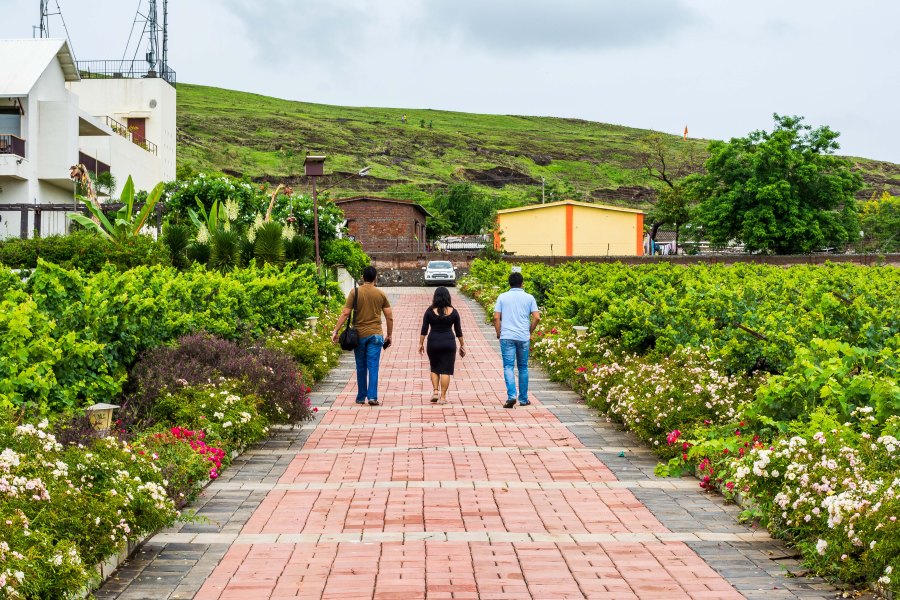 It was almost 3 pm and we had to make it to our camping site before sunset. So we spoke to the Keshav, who manages the entire accommodation facilities and headed toward Bhadardhara. Regardless to say, the drive was just pristine, we had only experienced something similar in the Himalayas. It had become all sunny around 4ish, and the only colour that dominated our view was green and blue.

We reached our camping site post sunset and we were welcomed with a hot cup of teas and pakoras, exactly what we needed after a long day drive. Keshav and made all the arrangements and our campsite was right in front under the stars. During monsoons, he mentioned that they avoid camping around the lake as it isn’t safe and not that convenient. We continued with our board games, Uno and rum sessions while snacking on barbequed fish, chicken along with varieties of munchies. For dinner, it was a meal full of local preparations bursting with flavours. We gulped down a full bottle of wine till the clock ticked 12, while we brought in my birthday.

Next morning we woke with a view of the cloudy mountain and green paddy fields. The breakfast was a simple buffet of poha and tea. We changed and left from our camping site for a local tour to the nearby scenic points and Bhandardhara lake. We called it a day with a delicious gauti lunch at Keshav’s place and left for Mumbai carrying lots of memories and planning another trip post monsoon just for the food. ☺

Note: all pictures are clicked by Aakash Naresh

3 thoughts on “Road trip to Nashik vineyards and Bhandardara”

Take a sip of inspiration

Available for Counselling and Supervision. Face to face in Lismore NSW or Skype.

Collection of pictures from various travel destinations around the world